Last night and this morning my Tweets total has gone from 1024 to 1172, I tweeted anyone I follow and anyone who follows me (apart from those that have already RT’d me) with this: – 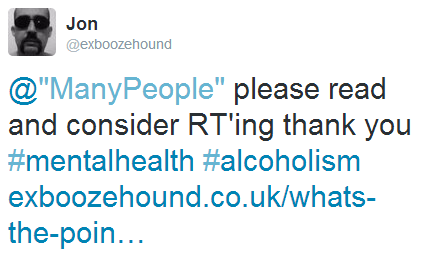 Yes it was a bit cheeky and could be considered as a bit spamish, but I was polite, I am overwhelmed with the response. My followers increased from 50 to 65, not big numbers yet but that’s an increase of 30%, my Connect page was awesome RT’s, Reply’s, Favourites and new Followers all over the shop, including some famous people………… Bostin ay it!!

I have tried to Tweet “Thank You” to everyone and have Followed the new Followers, I have tweeted an apology for anyone I’ve missed, blaming my “stupidity” as my excuse. I’m not actually stupid, perhaps academically stupid but I have a certain level of intelligence. The real excuse for missing anyone will be my complete inability to concentration for long periods of time (long periods being more than 5 minutes!), lack of concentration is a symptom of mental illness, I have now begun to wonder if my poor academic achievements are also down to mental illness, well I say “I have now begun to wonder…” in fact my wondering has stopped because it doesn’t matter….. cant change it move on.

I’m not going to rant and rave today because today is a positive day all I’m going to say is Recovery from Alcoholism or Mental Illness (in my opinion!) is as complicated as you make it. You probably disagree and I will probably disagree with me when I read this back in the future but, I got off the booze because of Bupa they paid for my month at the Woodbourne Priory Birmingham. I’m pretty sure I would not have been able to do it with AA or Aquarius I had to be taken out of the real world and concentrate on one thing. In February I will be 11 years sober, I am and always will be an alcoholic, I still miss the booze but in the end not drinking was pretty “uncomplicated” (that’s not true but lets go with it). I basically got Step 1: –

My Mental Illness recovery is still on going, but I have come a very long way!! I took a backwards step over the last week or so but oddly I’m happy about this because it has made me realise I’m not as stable as I thought so need to reevaluate. However I find my recovery easier to deal with when I keep it “uncomplicated” and I do this with a couple of “uncomplicated” motto’s: –

“Enjoy the good and ride out the bad”